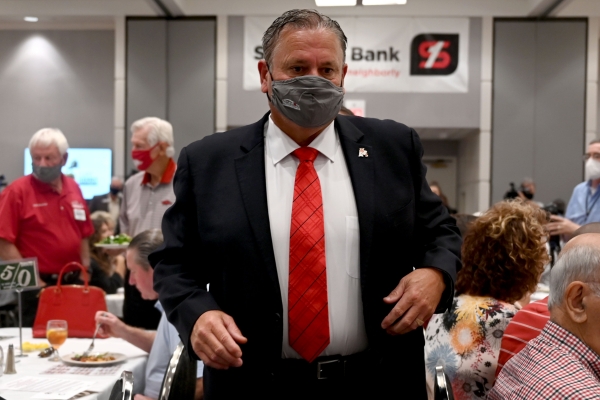 The public is one for Pittman

They got there early and lined up hoping for a prime seat.

Sam Pittman was speaking at the Little Rock Touchdown Club on Tuesday for the first time, and arguably one of the biggest indoor crowds since the covid-19 outbreak has gathered to hear what the college football coach of Arkansas had to say.

Just over 600 men and women gathered in the Ballroom at the DoubleTree Hotel in Little Rock.

They were young and old. Big and small. Some wore masks.

There was no party affiliation or argument about vaccines. It was a room full of Razorback football fans.

Red was the dominant color.

Pittman didn’t take the traditional photos or shake hands after the meeting. He was playing it safe against viruses, though he couldn’t help it when he spotted a man on the far right of the room. Pittman left the stage and put on a mask as he crossed the room and kissed the man in a bear hug.

Pittman didn’t look like the same guy who accepted the Arkansas job two years ago in December.

That day he was dressed in black and red and looked like a Georgian coach. Tuesday, he was all pig with a white shirt and a red tie.

While founder David Bazzel did his usual 12-minute introductions, Pittman sat quietly, smiling every now and then.

When Bazzel announced that sponsor Simmons Bank had $ 25 billion, Pittman leaned over Simmons CEO George Makris and asked for a photo together.

It was the first of several laughs he won.

When Bazzel looked through this year’s list of speakers, Pittman said, “I’m glad to be the first.”

Pittman came to entertain and get a better idea of â€‹â€‹the capital. He did not come to reveal game plans, strategies or games.

He mentioned a few players by name, but what he was doing was letting people get to know their football coach on a close and personal level.

Pittman was quiet and deeply sincere.

When it was announced that Big Red stores had taped 40 $ 25 gift cards under the chairs, Pittman didn’t reach for his. Instead, he watched and shared the fun of those who found the cards.

As Bazzel introduced him and said he was appearing for free, Pittman looked in the row at his agent, Judy Henry, and asked if this was true.

He made a summary of the players he wants to recruit: blue collar workers, hardworking, shoulder to shoulder and high character.

Pittman wants out-of-state players to be as proud of wearing the Razorback uniform as those who grew up in the state.

He spoke about his staff, especially the strength and conditioning coordinators and coach, and how important it was to keep them for a second year since they are the most active with the players.

He shared that the staff want kids who can multitask and play in more than one position. He explained that this allows more children to train, and the more they train, the less likely they are to become homesick.

He talked about name and image and likeness, and that the offensive line had a barbecue deal and he wished the whole team had it.

When it came to his personal involvement in NIL, “I’m Mr. out of here,” he said in a thunderous voice.

There is no “woe to me” in the Razorback football program because if anything is broken it will be fixed.

The last thing he said was, “Children define themselves.”

Sam Pittman is a selfless and hardworking coach who cares about his players and staff, and he goes to Arkansas like a red leather glove.