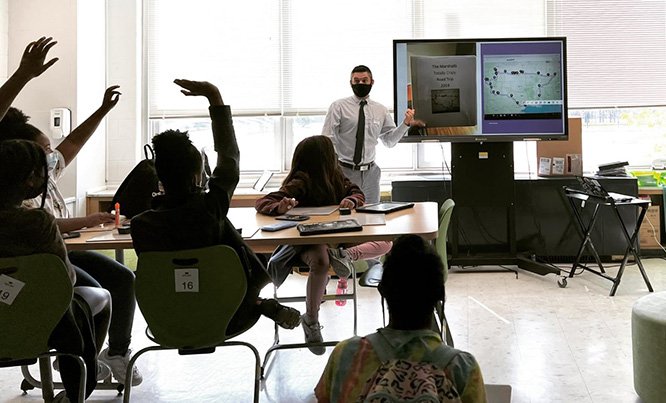 Kentucky Science and Technology Corporation “is the organization you’ve probably never heard of that runs the programs you love,” said Terry Samuel, president of the nonprofit.

Founded in 1987 by Kris Kimel and Lee Todd, the Kentucky Science and Technology Corporation (KSTC) has become a vital instrument in the advancement of science and technology in Kentucky and administers numerous programs related to education, entrepreneurship, economic development and other endeavors.

In December 2020, KSTC moved its offices to the third floor of Dudley Square in downtown Lexington. It opened its first satellite office in Louisville in November and is working to increase its reach by serving Kentucky’s growing tech economy.

Samuel joined KSTC five years ago after 30 years at Lexmark and IBM, first as an engineer and then as a business executive. “I was a private industry guy,” Samuel said. “To get into a nonprofit, a statewide economic organization, I had to learn a lot.”

He spoke with leaders of similar organizations in more than a dozen other states. Some of these organizations are part of state governments. “We are private or non-statutory,” he said, “but we have a close relationship with the state.” This relationship has developed over 34 years.

In the late 1980s, “there was clearly a need to do something in the state to develop and expand the focus on technology and innovation,” said Kimel, who served as KSTC chairman for 30 year. “We were in a huge transition of our economy, to woo globalism, technology, innovation, communications, all of that. Lee and I came up with this idea that we could create something to help push the state in the direction of technology and innovation, to provide leadership in this area.

With seed funding provided by the state under the administration of former Governor Martha Layne Collins, KSTC began as an advocacy initiative. In 1989, KSTC released a report, Kentucky Innovation Compact, which outlined strategies for advancing technology and innovation in Kentucky, including advancing science, technology, engineering, and math (STEM) education .

Their report caught the attention of the Brown Foundation in Louisville, which funded KSTC with a quarter of a million dollars. “That was the turning point,” Kimel said. KSTC has become an incubator of programs to foster technological innovation through education and business creation.

“We have to constantly innovate,” Samuel said. “Some programs, we continue, but we are constantly innovating on our programs.” Whether working with the federal or state government, universities, school systems, or commercial organizations, partnerships are essential to implementing KSTC programs.

Innovation means being open to stepping outside the usual boundaries of their efforts. One such program is Kentucky VALLO, funded by the Department of Labor, which helps military personnel who have acquired specialized service training obtain certification or licensing in Kentucky. About 16,000 military personnel transition to civilian life each month, Samuel said. Some of them have special training and are willing to move to Kentucky, where some employers are having trouble finding skilled workers. KSTC has developed 46 pathways, from social workers to mechanics, culminating in state certifications in these areas.

The Kentucky Enterprise Fund, the primary fund of KSTC Venture Finance, made its first investment in 2002. The fund has invested over $30 million in more than 160 companies, 70% of which have delivered positive returns or are still in business in Kentucky. These companies attracted follow-on investments of around $1.4 billion, according to KSTC tracking. In addition to funding, KSTC provides logistical support to startups.

Its Virtual Academy, part of Advance Kentucky, the educational arm of KSTC, makes advanced physics and advanced computing available to students across the state. During the pandemic, Advance Kentucky has moved much of its Advanced Placement (AP) content online to ensure Kentucky students have access to content to prepare for AP exams.

KSTC conducted longitudinal studies to see how Advance Kentucky AP students fared with college. Many more of these students attended college, stayed enrolled longer, and achieved higher graduation rates, compared to a control group. “It’s a great program for the state,” Samuel said, “and it receives consistent support from the Kentucky Board of Education and the General Assembly.”

Kentucky is one of several states to offer the Maker Minded program through a collaboration between KSTC and the national manufacturing institute LIFT, which opens the door for students to consider careers in advanced manufacturing. Another Advance Kentucky program, Access Algebra, prepares middle schoolers for high school calculus, essential for those pursuing the sciences. KSTC also has an IT initiative for schools, including a partnership with code.org and a digital literacy program with 3D printing.

KSTC also works with higher education but from the business side. In partnership with the University of Kentucky and the University of Louisville, KSTC formed the Kentucky Commercialization Ventures (KCV). KCV provides expertise to Kentucky’s six regional universities and the Kentucky Community and Technical College System (KCTS) in transferring research and development projects to commercialization, bringing products to market, and creating revenue streams for colleges. colleges.

“We have the first-ever KCTCS patent application,” Samuel said, “and we have the first license agreement on anything out of Eastern Kentucky University.” Under the KCV umbrella is the Kentucky Network for Innovation & Commercialization (KYNETIC), which receives funding from the National Institute of Health to develop health products.

In addition to its education efforts, with more than 30 employees in Lexington, an office in Louisville, and Bowling Green, Paducah, Somerset, and Covington, KSTC offers a variety of Kentucky business support programs. “Our mission is to build a thriving, technology-based entrepreneurial economy for Kentucky,” Samuel said.

Another partnership highlighted by Samuel associates KSTC with Kentucky Innovation, a program of the Kentucky Cabinet for Economic Development (CED). Anthony Ellis, executive director of Kentucky Innovation, describes KSTC as “your premier one-stop shop” for small businesses with scalable growth potential to find investors and resources.

In 2020, CED redesigned the structure of its system to support economic growth and innovation across the state. Six KY innovation hubs or regions encompass the 120 counties.

“KSTC has done a great job helping to lead this transition quite smoothly,” Ellis said. Part of driving Kentucky’s tech economy right now, Ellis said, is “the great migration.” More than 4 million people left their jobs at the end of last year. “We’ve seen a huge increase in one-way movements from the coasts to Central America,” he said. “We believe there is a great opportunity to reclaim a lot of talented Kentuckians who had moved on. We need an influx of highly skilled workers to keep our state at the forefront and keep moving forward. .

On the other side of the equation, the KSTC Kentucky Procurement Technical Assistance (KYPTAC) program helps businesses connect with federal, state, and local governments that need their goods and services.

Everything works together. Samuel keeps in touch with Lee Todd, professor of engineering and former president of the United Kingdom. He likes to remember Todd’s lament that he sent his engineering graduates out of Kentucky to find work. “Why not create the work right here in Kentucky?” he asked. This is a concern for which KSTC continually seeks solutions.

Do you see Microsoft 365 spreading through your business? Cybercriminals too • The Register

From regulatory relaxations to increased spending, what the HR sector hopes for