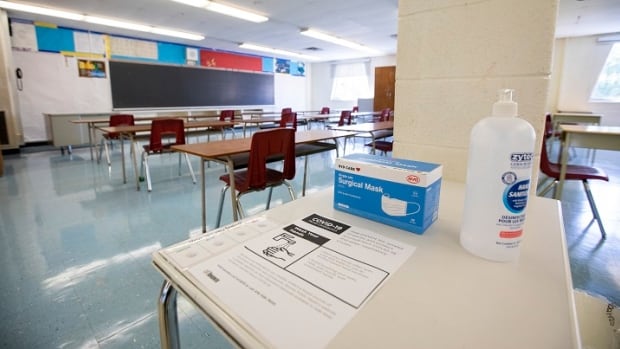 The Saskatoon Public School Division said it is redeploying staff to support everything from classroom instruction to childcare due to a recent spike in COVID-19 cases and a shortage of teachers.

The school division said there were 439 self-reported positive cases at its schools in the first eight days after the vacation.

In a letter to families Wednesday, Saskatoon Public noted that the total number of cases is the same as that seen in the first four months of the school year. He attributed the sharp spike to the Omicron variant of the coronavirus and the reporting of positive rapid home test results.

The school division said the growing volume of cases was impacting its staff and disrupting some classes, forcing it to shift resources.

The Saskatoon Public School Division is redeploying staff to support everything from classroom instruction to child care due to COVID-19 cases and staffing shortages.

A total of 10 elementary classes are now online.

In a CBC interview Saskatoon morning On Thursday, Saskatoon Public education director Shane Skjerven said teachers are getting creative in handling the situation, but it hasn’t been easy.

“I’m not going to speak on behalf of every member of staff, but I think it’s fair to say that, absolutely, they’re tired – they’re tired of this pandemic. It’s stressful and there’s increased pressure,” he said. . “But many still come to work every day and show up to do the best they can.”

With 10 elementary school classes now online and other students or teachers absent, Skjerven estimated that most public schools in Saskatoon are 75 and 80 percent full these days.

He said bus transportation has not seen any substantial disruption so far, but school administrators continue to monitor it.

“We have our contingency plans in place as best we can with the resources we have, and we will continue to adapt,” Skjerven said, noting that review meetings are held several times a day. “We are ready to pivot, if we need to.”

10:02Saskatoon Public Schools says there were as many cases in the first 8 days of school as in the previous four months

The children are in class in Saskatoon, but Omicron sows uncertainty. To better understand how schools are coping with Omicron, host Leisha Grebinski speaks with Shane Skjerven, Principal of Saskatoon Public Schools. 10:02

As of Thursday morning, Greater Saskatoon Catholic Schools (GSCS) said a total of 460 cases of COVID-19 have been reported since Monday.

The division said it is also seeing an increase in staff absences, mainly because they are sick, isolated or caring for sick or isolated children.

“So far, we are able to reassign staff within a given school to cover absences that cannot be filled by replacements,” GSCS spokesman Derrick Kunz wrote in a statement. email to CBC News.

“This could mean that the level of specialist services for students [like extra literacy supports] is reduced. We’re not there yet, but realistically we could get to a point where we need to reallocate staff or move resources more widely. »

Ten classrooms within the GSCS have also switched to remote learning, Kunz noted.

In Regina, the Catholic School Division — which, according to its website, reported 186 cases of COVID-19 from Monday to Thursday — is in a similar situation.

“We have been able to continue to run our schools safely thanks to the creativity and flexibility of our staff,” Regina Catholic spokeswoman Twylla West said in an email to CBC News.

She noted that some educators took on different tasks when necessary. For example, there have been times when a learning catalyst teacher may end up teaching in a classroom or a nutrition worker steps in as a teaching assistant.

“It’s not ideal, as these employees are already playing roles that we consider vital, but it has allowed us to maintain face-to-face learning so far,” she said, adding that no Catholic classroom in Regina has had to switch to online learning.

Regina Public Schools – which no longer publishes daily case numbers but instead lists the number of affected schools on its website – said it has not had to deal with “significant” staff reassignments educational or operational disruptions so far.

However, a spokesperson noted that five classes at Regina Public Elementary School have had to switch to remote learning since Monday.

The Saskatchewan government said it recognizes the number of COVID-19 cases in the community will impact schools.

“There will be disruption to classroom learning,” the Department of Education wrote in an emailed statement on Thursday.

“However, with a tiered approach of continued masking, access to rapid testing, increased sanitation, cohort and students and staff staying home when sick, schools provide an environment learning as safe as possible.”

The ministry said an education sector committee called the “Business Continuity Planning Team” was recently created to guide Saskatchewan schools through the challenges of the pandemic.

The group held its first two meetings earlier this week, the ministry said, and it will continue to meet regularly.

The Saskatchewan Teachers’ Federation (STF) said they would have liked to have a seat at this table.

“If you don’t look at things from a teacher’s perspective, you have to assume that there will be implementation issues,” said STF President Patrick Maze. “We’re a bit frustrated because the government is trying to invent the flying plane and they really don’t seem to have a plan for education.”

Maze said if the province had followed the STF’s advice and delayed the start of in-class learning by at least a week, as most jurisdictions have done, Saskatchewan schools would not face the current level of COVID-19 cases and teacher shortages. .

“It would have been more responsible to take a few days, like every other province in Canada, and assess the situation and make sure we can provide a safe education for our students,” he said. “Unfortunately we didn’t – and now we are paying the price.”

Summit County to study the causes and solutions of poverty