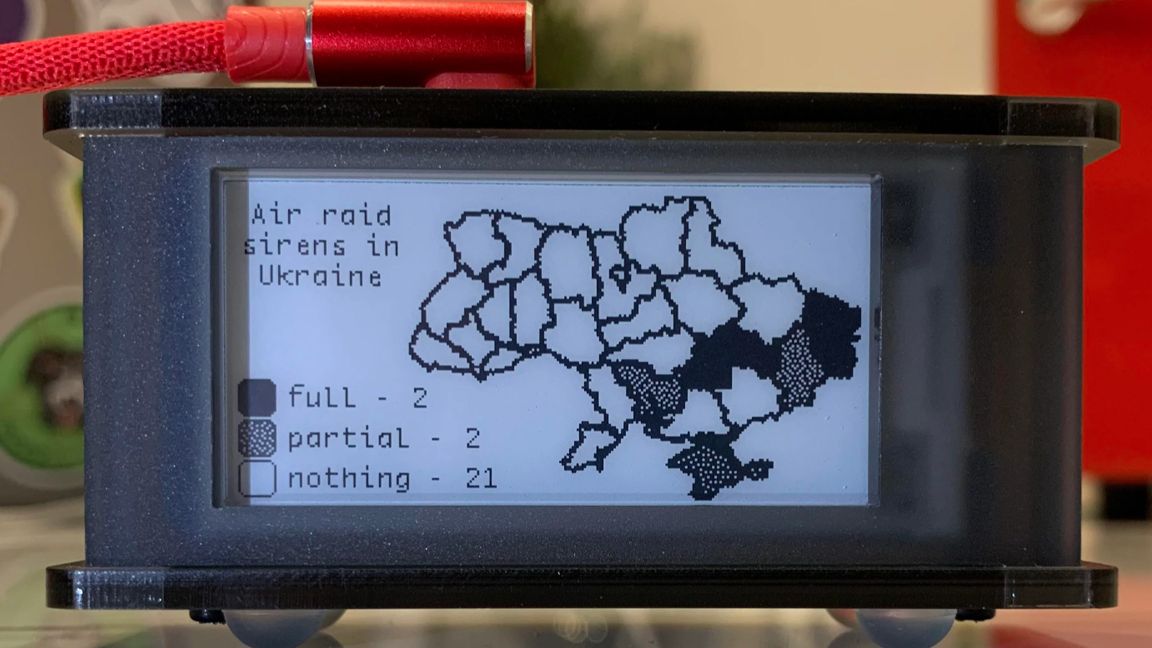 Dr2mod, a Ukrainian manufacturer whose Raspberry pie work that we have covered in the past, has developed a air raid siren monitor using a Raspberry Pi Zero W. This simple Pi project provides critical data regarding Ukrainian air raid sirens in real time using the SBC as well as an e-Ink display for visual output.

This isn’t Dr2mod’s first foray into Pi-powered monitoring systems. He recently created a Raspberry Pi Pico Powered Solar Tracker which predicts the location of the sun based on the user’s physical location and transmits the data to an e-Ink display. He also created a Pi-powered SDR Aircraft Monitor which could relay real-time flight data to a Waveshare LCD display. But it’s arguably one of the most crucial Raspberry Pi monitoring systems he’s ever developed.

The Air Raid Siren Monitor works by displaying a map of Ukraine on the e-Ink screen. A key is displayed to the side, indicating what the different coloring patterns mean and how many territories are estimated to be affected next to each. For example, if a zone sounds its air raid siren, the display will update with the darkened location and increase the number next to the darkened keypad by 1.

The monitor is built around a Raspberry Pi Zero W, which uses less power than a full-size Pi and offers wireless support. However, a Raspberry Pi 3 B+ or Pi 4 would work just as well. The display is a 2.13 inch e-Ink HAT from Waveshare designed specifically to attach to the Raspberry Pi.

According to Dr2mod, the data used to determine whether an air raid siren is activated or not is taken from Telegram. The e-Ink display updates automatically when an air raid siren confirmation message is submitted through a predetermined Telegram channel.

This Raspberry Pi project is completely open source for anyone who wants to recreate it on their own. The best way to get started is to check out the project at GitHub to take a closer look at how to set it up and get started. Be sure to follow Dr2mod for future Pi projects and any updates on this one.

Globalstar (GSAT) and the Critical Contrast of the Competition

The mayor’s office may launch a program to pay neighborhood liaison officers to report litter, graffiti and camping hotspots