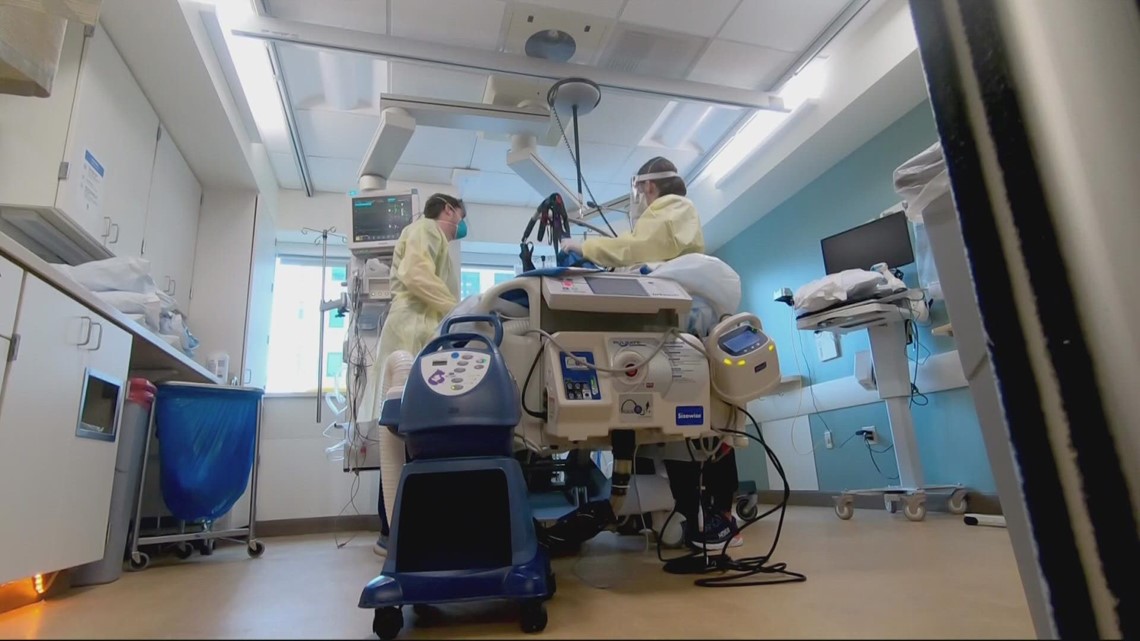 How many healthcare workers go unvaccinated in eastern Oregon?

State data shows that in Umatilla County, 36% of health workers are not vaccinated.

More than a quarter of all healthcare workers in Umatilla, Union and Morrow counties are still unvaccinated, according to the Oregon Health Authority. All would be fired or forced to resign under the mandate.

Hospitals in all three counties say they are working to comply with the mandate, but none would disclose specific plans for how they would adjust or change operations if there is a shortage of workers.

“We understand that this new requirement has been well received by some and has caused great concern for others,” said Mardi Ford, spokesperson for Grande Ronde Hospital in La Grande. “While we value each of our employees and support their right to make that choice; As a private, not-for-profit critical access hospital, we must follow this government directive to continue caring for our community. We don’t want to lose a single member of our team.

In recent months, officials at regional hospitals have said they are already struggling with a shortage of workers. Staff said they were exhausted after the delta variant ravaged the area, hospitalizing large amounts of unvaccinated people. In Umatilla County, the unvaccinated accounted for about 49 out of 50 hospitalizations this year, according to county data.

Hitzman said he was concerned that a mass layoff would only exacerbate the problems facing the healthcare system during the latest wave of the pandemic.

“It’s going to have a huge impact on the system,” said Hitzman, a vocal supporter of the vaccine who opposes the mandate. “We’re all stretched out already. If you happen to have a car accident, you must hope that they will have a bed for you in the hospital. If I have a heart attack, will they have a bed for me in the hospital? Will they have nurses to take care of me?

CHI St. Anthony’s Hospital in Pendleton has reported that 30% of its healthcare workers remain unvaccinated. Harold Geller, president of CHI St. Anthony, said the hospital was working on contingency plans for the mid-October deadline.

“As is the case with most hospitals, we are concerned about the number of staff who choose not to be vaccinated,” Geller said. “All of our staff are committed to providing high quality care in the safest way possible. They have done a tremendous job over the past year and a half. Every staff member is seriously thinking about this and we hope we will retain all staff.

Caitlin Cozad, spokesperson for Good Shepherd Medical Center in Hermiston, said the hospital had “emergency plans in place to stay fully operational” and “make sure we have sufficient staff to respond to needs of our community ”. She added that the hospital is “on track to fully comply with the state’s mandate.”

Neither Ford nor Cozad disclose how many of their health workers are vaccinated.

But state data shows that in Umatilla County, 36% of health workers are unvaccinated. In Union County, that number is 26%. In Morrow County, it’s 28%.

Kevin Mealy, spokesperson for the Oregon Nurses Association, said in a written statement that the union is calling on “all nurses and health care workers to get vaccinated by the Oct. 18 deadline or complete the necessary paperwork. for a medical examination or profound exception of religious belief.

If they don’t, they could be fired.

“Losing even one bedside nurse will worsen Oregon’s nursing crisis and put the health of the community at risk,” Mealy said. “ONA expects CEOs of hospitals and health systems to follow federal labor laws and sit down with nurses to negotiate the impact of workplace immunization policies and find ways for health care workers at risk to continue contributing during the outbreak. “

Good Shepherd from July 21 to September 15 reported 54 cases of COVID-19 among staff, according to state data. Grande Ronde staff from July 15 to September 1 had 35 cases. And the staff at CHI St. Anthony from August 19 to September 3 had 10 cases.

Several hospitals say they have seen an increase in vaccinations among healthcare workers since the mandate was announced.

The vaccine’s mandate came in response to the rapid rise in the number of COVID-19 cases statewide as the delta-variant wave almost completely filled Oregon hospitals with unvaccinated people. To curb the spread, Brown announced the tenure of healthcare workers and teachers in August, when the infection was at its peak.

But Hitzman said he believed the state was pushing the region’s health care system into a lose-lose situation. He said healthcare workers should get vaccinated because they work with sick patients, but added that those who have built their careers in the field may not have much on their own. to lean on.

“What are they going to do, just change jobs? He said, adding, “For most of us, we are deeply rooted in our professions. It’s not like we can just do something else… It’s going to create financial hardship for these people.

Additionally, he said the deadline came at a particularly critical time for Umatilla County. Last week, tens of thousands of people flocked to the county for the Pendleton Round-Up, an event where most people were maskless and no proof of vaccination or negative COVID-19 testing was required.

For months, healthcare workers have voiced concerns about the risk of increased infection after this event. Hitzman noted that if an increase were to occur, it would be within two to three weeks of the event – just around the time the mid-October vaccination deadline arrives.

“We’ll see what the numbers are over the next two to three weeks,” Hitzman said. “But if we see a major spike, I won’t be surprised. I’ll breathe a sigh of relief if we don’t.

BlackBerry: The Business Case for a Unified Approach to Critical Event Management

Yellen warns Congress debt limit must be increased by October 18

The dark side of reopening borders in the Pacific