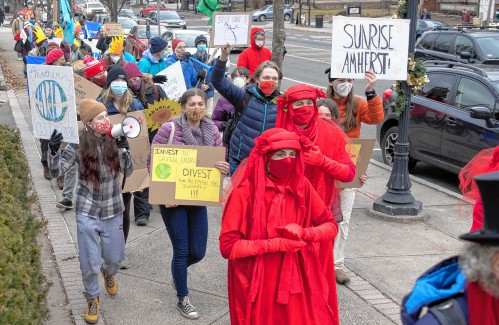 AMHERST – Over the summer, Felicia Mednick d’Amherst allied with native tribes in Minnesota to try to push back the construction of a pipeline they say will compromise their water supply and cause further damage environmental.

Based on the experience, local Mothers Out Front member Mednick gathered with other protesters outside downtown Amherst banks on Wednesday to advocate against funding for similar pipelines.

â€œWe are asking bank managers to tell their superiors that clients can withdraw their money from banks if they don’t change their investment strategies,â€ Mednick said.

The hour-long Stop the Money Pipeline action was hosted by Climate Action Now, Extinction Rebellion and the Amherst chapters of Mothers Out Front and Sunrise.

Starting at the TD Bank branch on Triangle Street and ending at the Bank of America on South Pleasant Street, the protesters held signs reading “Stop Funding Climate Disaster” and “Stop the Money Pipeline” and wore costumes, some in formal wear. in red dresses signifying victims of climate change, while others donned headdresses designed to resemble the sun’s clean power source.

The banks were chosen for their involvement in financing Line 3, an oil pipeline owned by Canadian multinational Enbridge, which spans more than 1,000 miles from Hardisty, Alberta, Canada, to Superior, Wisconsin. .

â€œCollectively, we are calling on financial institutions to divest from fossil fuel pipelines,â€ said ChristeneDeJong of Amherst, a member of both Extinction Rebellion and Mothers Out Front.

A letter to the banks read, in part, “We urge you to respond to this climate emergency and end all funding for fossil fuel projects.”

Although DeJong and Mednick attempted to hand deliver the letter, both bank branches locked their doors, although they managed to get the letter through the TD Bank drive-thru window. They said they would not be discouraged, chanting at one point “we are sweet and angry people, and we sing for our lives.”

Mothers Out Front member Andra Rose d’Amherst has pledged to return. â€œWe’ll bring him back tomorrow when we’re not so threatening,â€ Rose said.

Teenagers from Amherst Sunrise explained their support for stopping construction of oil and gas pipelines.

â€œWe have to move away from fossil fuels to save our future,â€ said Marisol Pierce Bonifaz, a student at Amherst Regional High School.

Even though the calendars say it is mid-December, another student Julian Hines said the lack of snow on the ground is another indication of climate change.

â€œTD recognizes the importance of responsible development of conventional energy as we support the long-term transition to a low-carbon economy and a sustainable future. As part of its Climate Action Plan, TD aims to achieve zero net greenhouse gas emissions associated with its operations and financing activities by 2050, in accordance with the principles of the Paris Agreement.

A request for comment from Bank of America was not immediately returned.

The action took place ahead of the 11th hour strike for climate change to be held at 10:45 a.m. on Saturday on South Amherst Common. The initiative aims to ring church bells across the country for 11 minutes on the 11th of each month at 11 a.m.