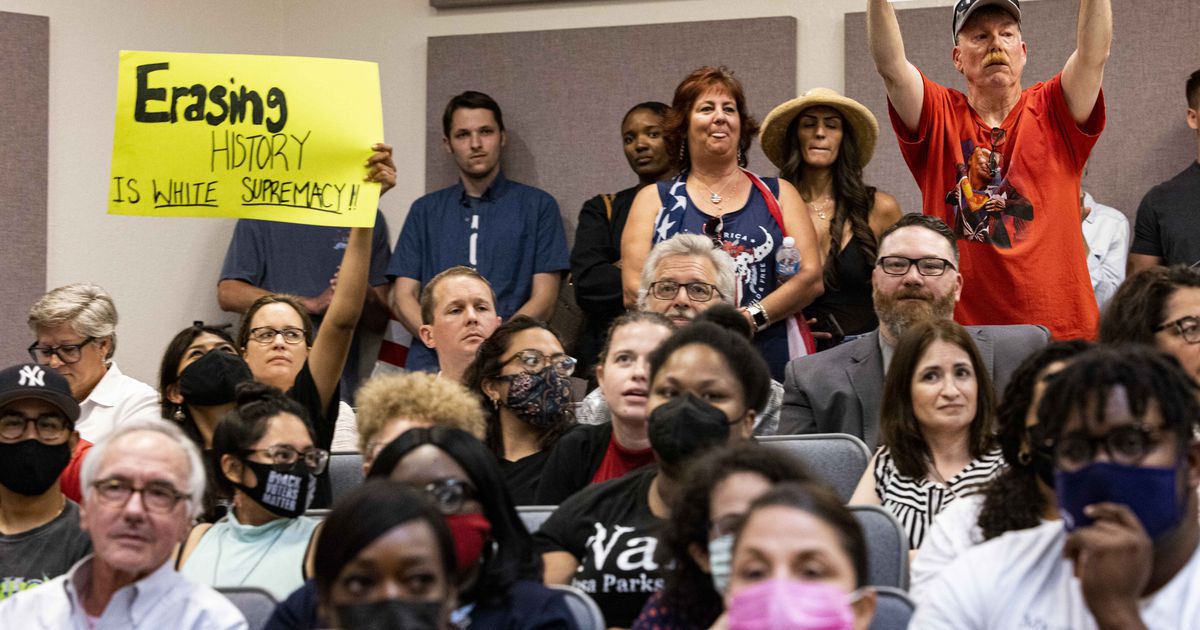 Even before all of the Fort Worth trustees could take their seats, the chants of “No CRT!” Echoed around the room to be countered by a woman shouting, “Stop whitewashing history!”

Parents, pastors, teachers and recent graduates held a routine meeting that quickly turned into one of the first major conflicts since Governor Greg Abbott signed a law to uphold the “critical theory of race â€outside the classroom.

Many people gathered on Tuesday night decried the concept, which has become a political lightning rod for the Conservatives. Others, however, implored administrators to push for honest conversations about America’s often painful past and present.

The debate is far from over and will likely continue to dominate Texas boardrooms. Abbott still wants lawmakers to do more to “abolish” critical race theory in schools – although he has yet to outline the specific steps he wants to take in an upcoming special session.

Fort Worth administrators heard from parents concerned that schools are embarking on a divisive policy with their children as well as many families who have urged the district to take action to make education more equitable for students colored.

The term â€œcritical race theoryâ€ – a decades-old academic framework that explores how racism is embedded in American policies and systems – has recently been co-opted by conservative pundits.

Opponents often confuse it with broader district diversity and inclusion efforts, anti-racism training or multicultural programs. In doing so, school district boards have become a central battleground in this cultural war, even though the central issue is often misunderstood.

Some parents threatened to leave the neighborhood because of this fight. They accused the district of indoctrinating the students and making them feel like “oppressed or oppressive” because of the color of their skin.

â€œWe teach our students that they are labeled by the color of their skin,â€ a stakeholder told the board.

Critical breed theory is not taught at Fort Worth ISD, spokesman Clint Bond said. Texas educators across the state repeatedly insist that this is not part of the K-12 curriculum.

Yet dozens of people gathered for a march ahead of the meeting, claiming they had gone out to protest “CRT” in schools, which they said is harmful to children and creates divisions. At the same time, many more came together to support the ongoing work aimed at reducing racial disparities in student achievement and expressed confusion as to why this academic setting was at the center of the meeting.

The vast majority of Fort Worth ISD’s approximately 83,000 students – about 85% – are black or Hispanic.

“We know that when racial equity is not addressed consciously, racial inequality is often replicated unconsciously,” Kimberly Williams, an African-American educator, told the board.

The FWISD created a Racial Equity Committee in 2016, with the aim of dismantling institutional racism within the school system.

Directors passed a resolution last year, following the murder of George Floyd by a white police officer, calling on leaders to speak out against racism, prejudice and intolerance. Across the country, some education officials have turned inward, reassessing everything from how they teach history to how they discipline students of color, who are overrepresented in the most punishments. severe.

The Dallas ISD, for example, is set to ban most suspensions after years of data showing the punishment was being disproportionately inflicted on black children. Other neighborhoods brought elements of The New York Times’ Project 1619 – a series of award-winning essays seeking to reframe American history around the consequences of slavery and the contributions of blacks – in their classrooms.

The backlash, in many places, has been swift.

Several states, including Texas, have taken steps to ban their interpretation of critical race theory in classrooms. Abbott signed a bill last week that educators say will make it harder for them to talk about race and racism in the classroom.

Tuesday’s meeting makes it clear that the fight will continue to dominate school district boards and parental attention.

At a recent NAACP panel in Dallas, a member of the State Board of Education prepared audience members to speak out against legislative interference in social studies classrooms.

Aicha Davis, a Democrat from the Dallas area, said she was preparing to “rally the troops” in Austin. She joined several other senior education officials in opposing the bill, which has been fiercely criticized by educators, business leaders and civic organizations.

The new law is full of vague terms with an exhaustive list of ideas that teachers should not talk about. This is reminiscent of former President Donald Trump’s decree, since canceled, targeting diversity training.

Teachers cannot be “coerced into discussing a particular current event or a widely debated and currently controversial public policy or social issue”, according to the new law.

In social studies classes, educators cannot teach a variety of ideas, including that a person is inherently racist, sexist, or oppressive, consciously or unconsciously. School districts are also prohibited from requiring training that exhibits any form of racial or gender stereotyping or blame on the basis of race or gender.

It comes as many districts strive to explore how unconscious teacher biases – stereotypes that people may ignore they have – can negatively affect students of color.

Josiah Gaiter, program director for conservative organization FreedomWorks, said during Tuesday’s march that the ultimate decision-maker for a child’s education should be their parents, not school districts.

Many academics have spoken out against the way critical race theory is discussed, saying it is misunderstood.

â€œAt a fundamental level, this exposes racism and oppression in our contemporary society,â€ said Jonathan Chism, professor of history at the University of Houston-Downtown, co-editor of Critical breed studies in all disciplines. â€œHe tries hard to resist her.

The DMN Education Lab deepens coverage and conversation on pressing education issues critical to the future of North Texas.