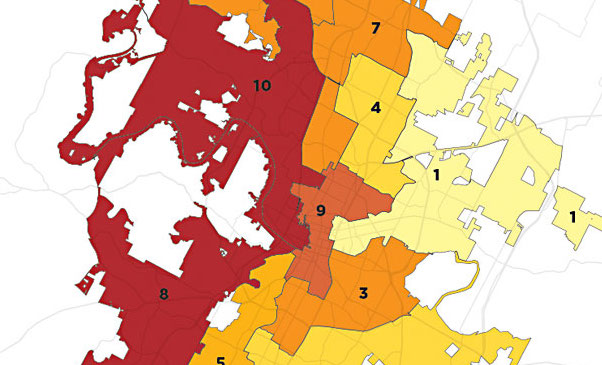 How shall we quantify Austin’s historic housing crisis today, readers?

It’s bad, guys. The Austin Council of Realtors reports that in April, the median selling price of a home in the city of Austin rose 16.3%, year-over-year, to reach $640,000 – yet another record for the city. Redfin reported in March that the five-county metro area had experienced a 40% increase in average rents, also from one year to the next; the average in the rest of the country was around 15%.

At the right time, based in Austin HousingWorkswho monitored the city’s progress towards achieving the objectives of the Housing Strategic Master Plan passed by the City Council in 2017, released its latest analysis of housing production city-wide and in each of the council’s 10 districts. If you earn less than Austin Median Family Income (which is just over $69,000 for one person, $98,900 for a family of four), your only future housing options within the city limits will be in the Eastern Crescent (Districts 2 and 4, and the non-gentrified parts of Districts 1 and 3). Or maybe you will live in the city center District 9which has many subsidized housing units in West Campus and the approximately 1,200 houses in Muller reserved for tenants and buyers below MFI. These five districts are on track to meet or exceed their Master Plan goals, but the western half of the city (Districts 5, 6, 7, 8, and 10) is thousands of units behind those goals.

In terms of total housing production, the Blueprint predicted 135,197 new homes by 2027, of which approximately 90,000 would be affordable to households at 120% MFI or less. According to data from the Texas Real Estate Research Center At Texas A&M throughout Travis County, more than 100,000 building permits had been issued for various residential uses between 2017 and 2021. About 60% of those permits were for properties with five or more units, about 40% were for single-family homes. uses, and less than a measly 1% were for 2-4 unit projects.

On the agenda for city council today, June 9, are two similar but separate initiatives to change the Territorial Planning Code. We would reduce parking requirements and the compatibility standards which control the size of buildings near single-family dwellings, but only for properties located along specific identified transit corridors. The other would create a new zoning category, mixed vertical 2 (or “V2” for short), which would allow up to 90 feet in height and reduce the compatibility buffer (the distance to the nearest single family home) to 100 feet from the current 470 feet.

The latter (item 80 on today’s agenda) represents the culmination of the staff work initiated by the Board in November 2021, when the member of the Board Anne Kitchen introduced the V2 concept as a way to allow developers additional height (above the 60 feet permitted in current VMU zoning) to, among other things, accommodate ground floor retail. Throughout the V2 process, Kitchen presented the new zoning category as a modest update to an already successful density bonus program which brought affordable units to places like Burnet Road and East Riverside.

However, at the Council’s Housing and Planning Committee meeting on May 31, planner Sam Tedford said that since VMU’s enactment in 2010, only around a third of new developments on VMU plots have actually taken part in the bonus program. Staff analysis also found that due to compatibility standards, less than half of currently VMU-zoned sites can actually be built up to 60 feet; only about 34% could be built up to 90 feet.

Enter the new face on the stage, CM Chito Velawhich proposed narrow V2 changes to apply to properties along Connect Projectit is Orange and Blue light rail lines (Northern Lamar and Guadeloupe on one side of the city center, Southern Congress and east bank on another side). Properties along these corridors would only face height restrictions if they were within 100 feet of a single-family home (instead of the current 540); similarly, they would only have to build 25% of the required parking lot. Other master plans for these areas (such as the East Riverside Corridor Regulation Plan and Hyde Park’s Neighborhood Conservation Combining District) would prevail if they conflicted with these standards.

While Vela’s amendments could be accommodated, staff analysis shows they could have a profound effect on the amount of housing produced along the rail lines, where everyone on all sides of the debate over use of land says it supports density. As noted in a June 3 memo, a 100ft buffer would mean that 81% of VMU plots could be built up to 60ft and 73% could be built up to 90ft. As we reported last week in “Public Notice” (“Setting an Agenda for Land Use”, News, June 3), Kitchen welcomed Vela’s amendment, but in its latest version of V2 it has also strengthened on-site accessibility requirements that make properties eligible for the bonus, either at 15% of rental units affordable at 60% MFI or 12% affordable at 50% MFI. (The staff had recommended 12% and 10%). Fine-tuning affordability requirements is a delicate balancing act; they must be rigorous enough to meet Austin’s enormous needs without being so strict that developers cannot fund their projects and therefore end up withdrawing from the bonus program.

Then there is the second proposition. In April, Vela proposed to completely exempt VMU properties from compatibility and parking requirements, which would make 90% of VMU plots buildable at 90 feet in height. But in the background, the mayor Steve Adler and Mayor Pro Tem Alison Alter were working on a compromise – also on the June 9 agenda as item 66 – which effectively killed Vela’s idea. Adler and Alter (as well as the CMs vanessa fuentes, Pool Leslieand paige ellis) have proposed slight relaxations of compatibility standards along specific corridors defined as “larger” (Project Connect corridors, highways, perhaps existing transit-friendly infill projects) and “medium” (corridors identified in the Imagine Austin’s Full Plan or the Mobility Bond 2016such as 45th street, Brodie Streetand Boulevard metric). The Adler/Alter proposal would allow plots to be built on these corridors at 65 or 90 feet at varying distances from the houses casting the compatibility spell, until it lost its effect at 300 feet. On major corridors, these projects could build only 25% of the parking otherwise required; properties in middle corridors would benefit from a 50% reduction in parking. None of these reductions would apply within 300 feet of a school.

All of these tweaks and twists would only produce more hallway accommodation which, even with the orange and blue lines in place, will have high vehicle traffic, more pedestrian accidents, and more asthma and other effects on health due to vehicle emissions. Building housing in the neighborhoods between these corridors is politically impossible most of the time. Staff recommended that Council consider other changes to CLDs that might help, such as smaller lots and the right to build accessory dwelling units, but these ideas will need to be debated in the future, perhaps -be by a new board.

Do you have something to say ? The the Chronicle welcomes opinion pieces on any topic from the community. Submit yours now at austinchronicle.com/opinion.