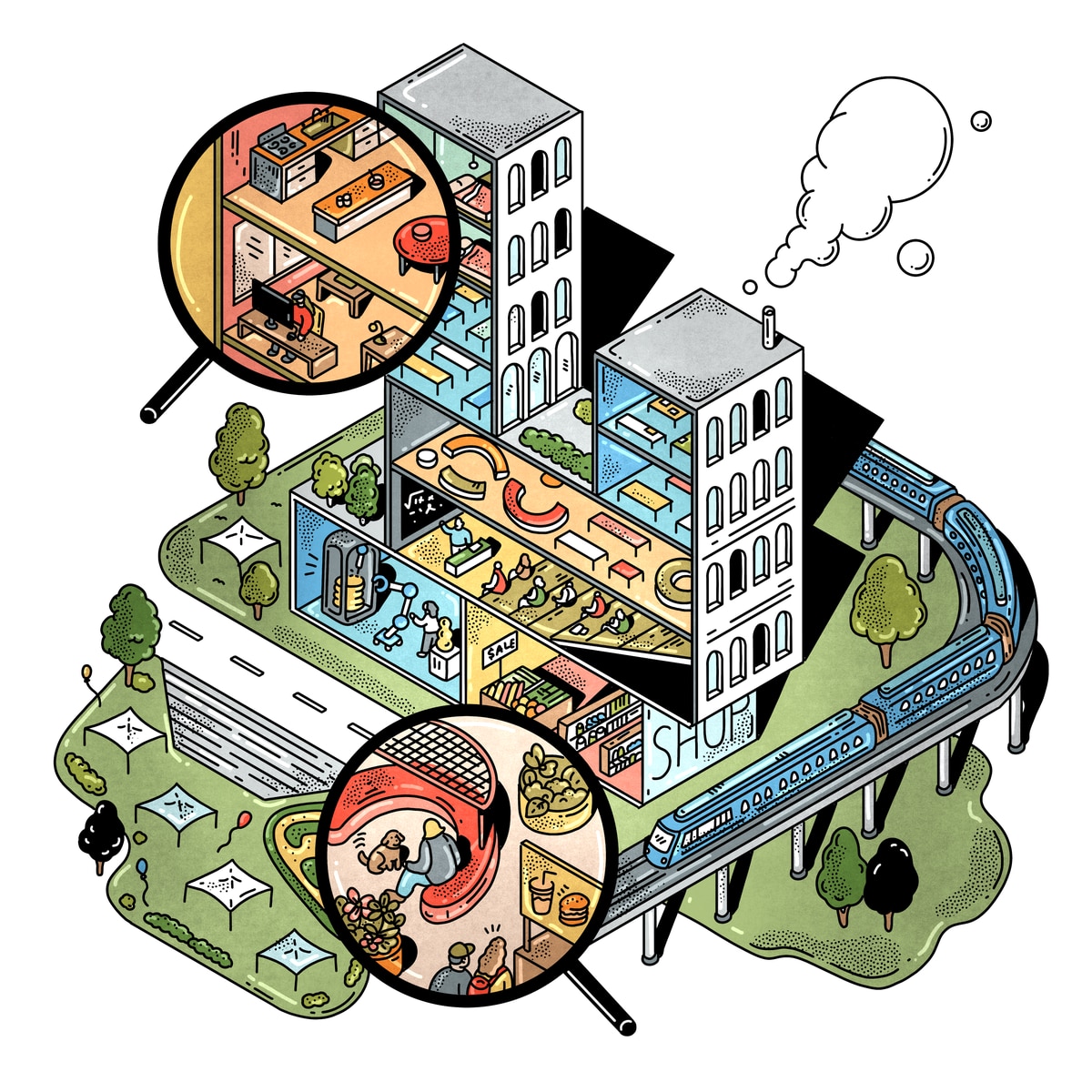 STURGESS: OPENING ON THE STREET

â€œRight now, downtown Calgary is a ghost town,â€ said architect Kevin Harrison, director of Calgary Sturgess Architecture. The problem, he said, begins with the region’s history as a nine-to-five office district. What can architecture do about it? A lot.

Sturgess came up with the idea of â€‹â€‹remaking the streetscape by changing the design of existing office buildings. For example, he selected Eau Claire Place I, on 3e Avenue Sud-Ouest. It is â€œa typical oil boom building,â€ as Mr Harrison put it: Built in the late 1970s, covered with brown precast concrete panels and unfriendly to the streets. Its first floor is a dozen steps above street level. â€œThis is a two-meter-high wall here along the sidewalk,â€ Mr. Harrison said in a recent video interview, pointing to the structure’s concrete parapet along 3rd Avenue. â€œWhat kind of message does this send to you as a pedestrian? Is this a place you want to be? “

The Sturgess Plan would tear down that wall. He would then transform the space between the building and the sidewalk into a series of shallow steps, connecting the first floor to the public domain. Then, the key gesture: replacing the office space on the first floor with a restaurant.

As for the floor, the architects think it is a good candidate to be converted into apartments. Each floor measures approximately 11,000 square feet, small enough to accommodate reasonably sized apartments. Dark areas in the center of the building could be converted into storage lockers. In terms of architecture, Sturgess suggests keeping much of the precast concrete on the facade. â€œOur approach speaks to the history of the building, but treats it in a new way,â€ Mr. Harrison said. It sounds wise: rather than removing and demolishing all the material, the architects would keep its thick texture partly intact, while opening about half of the facade to the windows. All of this responds to a central lesson: â€œPeople want to be around people,â€ Mr. Harrison said. “After 20 months of being locked away at home, we have learned this more clearly than ever.”

OFFICE SHOW: DOWNTOWN AS A CROSSROAD

A big challenge demands a big answer, and the ideas that the Calgary-based Spectacle Bureau has because the city goes far beyond buildings.

For the two studio partners, Jessie Andjelic and Philip Vandermey, the city center should be synonymous with the exchange of ideas. â€œWe need to reinforce the importance of the center as a place for networking and collaborative innovation,â€ Vandermey said in an interview. The architects – both teach at the University of Calgary – are proposing two types of changes: modifications to buildings and surrounding streets; and new activities within these buildings.

Spectacle suggests that downtown office buildings need to change form and function. The cabins disappear. The walls are disappearing. Stairs and escalators open up connections between floors (holding elevators in place). Upstairs, a floor is transformed into accommodation, and an adjacent building is now entirely residential, with balconies and gardens piercing the facade.

This new activity is coming out on the street (for which they imagined, for example, 4th Avenue near 8th Street Southwest). It was reduced to three lanes reserved for vehicles of four, and converted to two-way traffic. The residual space now houses Bike paths, new rows of shady trees and wide sidewalks, onto which restaurants and co-working spaces open.

Spectacle also suggests a new economic agenda: “one that is diverse, circular and rooted in the expertise and production of renewable energy”. Green energy companies, as well as those in agricultural technology, materials science and education, would be ideal tenants for this new downtown.

These knowledge-based industries would find a meeting place there, relying on a direct rail connection to the airport and a newly imagined convenience: a high-speed rail connection to Edmonton. This idea has many precedents. City centers – including this one – often developed around train stations, relying on the flow of people, goods and capital they brought.

What if empty offices became fertile ground for growing things? That’s the suggestion of Modern Office of Design and Architecture, a start-up Calgary company run by Dustin Couzens and Ben Klumper. They propose that the vacant downtown towers could accommodate a mix of urban agriculture and 21st century data centers.

As an example, MODA offers the old Nexen tower on 7th Avenue Southwest, which is totally vacant. Taking a pun, the firm dubbed its proposal NextGen City. Where many other downtown proposals start with housing, MODA imagines that jobs should come first.

He would completely renovate the tower to provide new electrical and ventilation systems – which, built in 1982, are likely in need of modernization. Agriculture would occupy 72 percent of the 37 levels of the tower; data centers and housing would take up the rest. The excess heat from the servers would be “harvested” to grow plants, thus helping to make the building self-sufficient in terms of energy and carbon. The result, MODA said, would provide enough products to meet the needs of the entire downtown population.

As the architects point out, agricultural technology is a priority for the city’s economic development. Business leaders hope the industry can draw on local expertise in agriculture, software development and hardware. â€œWe are encouraging the development of a thriving industry in Alberta at this time,â€ said Couzens.

MODA, best known for its creative multi-family housing developments, does not have a strong design program with this proposal. Why? â€œDowntown Calgary needs a value proposition,â€ said Couzens. â€œWorking in such a tax-conservative city, we know that everything will depend on what is commercially feasible. And MODA recently started working on projects with a real client to combine data centers and agriculture. “The idea is real,” Couzens said, “and that translates it from a horizontal context to a vertical one.”

URBAN STRATEGIES: “PEZZING” AND OPENING ON THE SURROUNDING CITY

Despite all the empty space in downtown Calgary, a team of planners from Urban Strategies and Intelligent Futures see strengths on which to build. â€œWe focused on what works in and around downtown,â€ said John Lewis of Calgary-based Intelligent Futures.

The planners – who also include Maxine Cudlip, Dan Godin, and Dennis Lago of Urban Strategies – believe the downtown area can thrive through connections to surrounding neighborhoods. â€œThe areas around the core are very strong,â€ Mr. Lewis said, including the seat belt to the south. â€œHow could we rely on them to have this economic and experiential diversity in the city center? “

The team focused on two areas. One near the Bow River and its attractive park system; this would become the â€œriver lab,â€ providing a new space for post-secondary and water-oriented institutions. A “railway laboratory” to the south would be linked to commerce and housing in the Beltline. â€œOur question is how flexibility, fun and joy could be applied to these places,â€ Ms. Cudlip said.

Their response is what they jokingly call â€œPezzingâ€: split existing towers to hold different types of activity, just like a Pez dispenser contains little candy capsules. Imagine a ground floor of an office building converted into shops. Above, the academic area. Above, offices and a shared workspace. And above all, the accommodation.

Planners also argue that streets and other public spaces need to be redone. One of the physical problems of the city center is the railway line that separates the center from the Beltline. They looked at the north-south roads that cut under this corridor and imagine digging dirt on either side of a street to create a new park space. This could be embellished with green spaces, an ice rink and ephemeral cultural places. What had once been uncomfortable tunnels could become public places that provide connections – visual, physical and experiential – between downtown and the rest of Calgary.

We have a weekly Western Canada newsletter written by our British Columbia and Alberta office managers, providing a comprehensive set of news you need to know about the region and its place in the issues Canada is facing. confronted. register today.